So finally, we were on our way. Flying through the skies, watching movies in a really crappy plane. Since we lost our seats due to the complications the day before, we were stuck in the middle aisle… behind a bunch of screaming, kicking children. I wanted to throw myself out the plane window after a while, but that’s alright. The legroom was atrocious, but that’s alright. Wes and I watched the newest Star Wars movies, and I dabbled around in watching a couple others.

Soon enough, we were descending into Tokyo. From what I could see from the windows, it was really foggy. If I’m remembering correctly, I believe it was about 4 in the afternoon. Quickly, we were ushered out of the plane and into Narita Airport. The buildings were insane! I had never seen anything that was so spacious. The first thing we saw after exiting the plane was a lot of Nintendo murals welcoming us to Japan. We were also screened for a fever, which was super interesting.

There were small shops everywhere. One notable thing was how nice all of the staff on hand were. Some of them spoke decent English, while some of them did not- no matter what, they would help us understand where we needed to go next. Quickly enough, we were able to find our baggage and begin our trek to the Airbnb… through a vast airport that was very confusing.

One of the first things we had to figure out was how to get to the train station. Luckily, the owner of the Airbnb, Makana, sent us very detailed instructions about how to travel from the airport and to surrounding areas in Tokyo. It took a while to find the Suica machine (a temporary ‘credit card’ to use in train stations, bus stops, larger stores, etc.) as it was underground where the trains were. After getting a card for each of us, we loaded our luggage onto a train and took the hour ride to our stop- Magomezawa Station.

Riding on the train was a surreal experience. It got dark so early while we were there- I assume because of the winter month we’d gone in. Looking out the windows, we would see the darkened landscape of fields, the illumination of buildings in the distance, and the occasional strange sight. And it was so quiet on the train. In Japanese culture, it is respectful to stay relatively quiet. Anyone that spoke talked in hushed voices, headphones were turned down low, and there were no ringtones on cellphones. I will say that we were lucky enough to make it onto the train after the evening rush. (We would experience this later on, and we were packed like sardines.)

As we exited the station, we looked around to find we were in a tightly condensed… neighborhood? Town? I honestly don’t know how to describe it! There were buildings connected to one another, a lot of small shops, a few izakayas (small, casual diner styled places- most of them consisting of only a 5 or 6 seated bar), and two large Family Marts (gifts from the heavens, I assure you). Following the directions that Makana gave us, we would trek up through the town, going up a winding hill that would lead into a neighborhood with many different houses. Now, these houses weren’t anything like we have in America, at least where I live. They were skinny and stood two to three stories, depending on which ones you were looking at. There were no yards- though some did have small plots in front of them where small gardens would be. Making it past a small post office, we would find a Coke machine, signaling that we had made it to our new home.

The pictures that were on the Airbnb site were false. It was more sprawling, modern furniture added, but all with a Japanese style twist. The furniture was low to the floor, other than the small dining room table. There were a few rooms that had sliding wooden and paper doors, which was surprising to me. We would explore the house, taking our things upstairs to one of the bedrooms. While there was a ‘western-style bed,’ there were a couple traditional beds as well. We would have a choice between the two. The traditional beds were twins, so we ended up taking the double bed.

After alerting Makana of our arrival, he would message me to find the phone that he had left for us (yes, he left a phone for us!) so that he could video chat us. He was SO sweet! I can’t gush about him enough. He gave us a number for us to call if we needed anything, as well as explaining how to use the WiFi puck, his phone, and many other things in the house that we would need to know about. The weirdest thing that we tried to figure out in the house was the washing/drying machine.

Gifts Makana left for the three of us

The shower was also really frickin’ confusing. It took me a full twenty or so minutes to figure out how to turn it on, and honestly, I almost flooded the floor the first time. But that’s another story.

Also, yes, the toilets had bidets. They also had sinks on top of the toilets. Again, Japan is wild.

At that point, we were hungry. We’d been left some instant ramen to make, but honestly, we really wanted to check out the Family Mart down the street! We’d heard a lot about them, both from friends that had previously lived in Japan and through research we’d done. That was an adventure. The convenience stores in Japan were basically food stores, but with fresh, prepared meals. Not the nasty stuff you’d go into a Spynx and get (no hate, but let’s be real. It can be crap sometimes). There were so many options that we ended up spending a reasonable amount of time in there. They had rice balls, dons (rice bowls), ramen, sandwiches… all kinds of stuff. We ended up getting a couple dons and some rice balls, going back to the house.

Let me tell you that it was one of the best meals I’ve had. It beat out a lot of the fancier restaurants that we had back home! The pork that I got was juicy, the rice sticky, and the egg super runny! I should also mention that the clerk at the store offered to heat it for us, which was really kind of him. Honestly, it was the perfect meal after a 14-hour flight. And good God, the rice ball… I think I ate that more than anything else while we were there. It was stuffed with seaweed and so good. 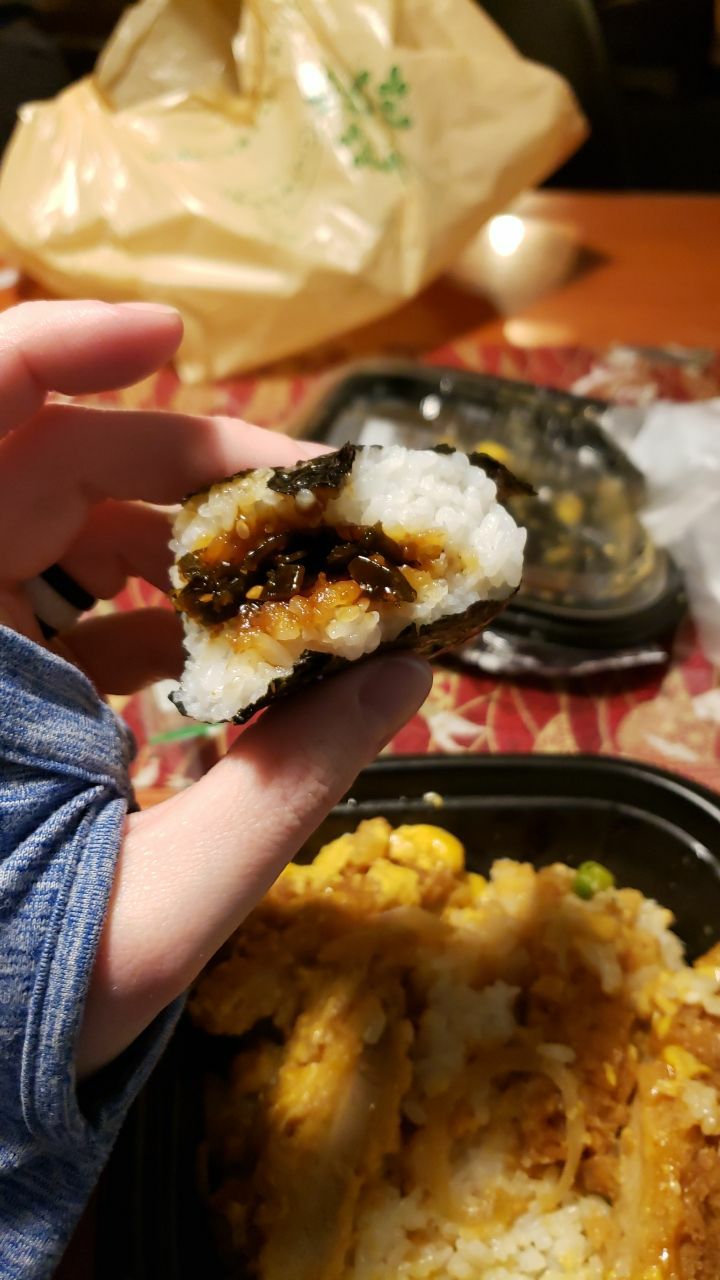 If I’m being honest, I don’t remember what we did after that. We sat on the porch for a while and watched the night owls go by outside, saw some really terrifying ravens that were everywhere. The exhaustion hit us really quickly, and the jet lag was real for me. We passed out pretty soon after settling in.

Needless to say, the first day was an adventure all on its own! I remember being in jaw-dropping awe the entire evening. Wes and I gushed about everything we were seeing to our friends back home, talking to them as they were getting up. Having a 13-hour difference between us and everyone else was kinda crazy and hard to keep up with.

Sorry for how late this was! With everything going on in the world at the moment, it’s been hard to find a time to sit down and really write things out. Thanks for being patient with me!

Follow The Girl with Thick Rimmed Glasses on WordPress.com